How's the Weather by You?

Everyone seems interested in the weather---the actual as well as what people say about it. You can learn a lot that way—listening to people's perceptions of the weather in their own countries and other countries.

Take Africa for example; what would an ordinary English person say when asked about the climate in Africa. They would probably immediately think HOT, and then their minds would unconsciously wander to thoughts of Ethiopia—perhaps a starving child, flies in their eyes and belly distended, painfully thin adults dressed in rags, staring balefully at the camera in a fetid refuge camp. Or possibly, a famous self-declared savior from the West, strolling purposefully past the decaying corpse of an animal beside a hot dusty road, or a Masai across endless plains with lion in the blistering heat, and horizons with melting, coppery sunsets.

And there you have it in a nutshell, Africa is associated with a hot and sultry environment, with it's people in dire straights, and animals in the wild—a widespread misconception, a myopic view which we cannot afford to cling to when in a world changing so fast. Sure some of that exists, but think again folks! I was just recently falling into a rhythym as the weather slowly changed from bone chilling cold to sweltering hot. Yeah, I bet you didn't know it snows in Africa, there are magnificant mountains such as Mt. Kenya, Kilimanjaro, Uganda's Rivengori Mountains, and yes, dear Ethiopia's Semien Mountains where it regularly snows, and there is even a ski resort or two in Africa.

But wait, there's more—we have other weather too, like a rainy season that most here pray for. Usually the rain in other parts of the world is calming, but here the storms can transform anyone's peaceful slumber from bliss to a scene in a Tom and Jerry cartoon, where Tom bangs a huge gong in Jerry's ear, and his entire body pops out of bed to Tom's delight. That's exactly what it's like---room shaking thunder that makes one feel like their room has been picked up and moved into a bone shaking, rauchous of a NYC dance club from the disco era. That's reality---huge, dark, looming clouds fill the horizon of a perfectly blue sky, and an absolute deluge of water covers your image of our hot and sultry paradise. Then with heat and rain, menacing bugs pack quite a punch, and you just hope they never crawl across your bed while asleep.

For such a diverse continent, there are fast changing realities, with cafes, malls, BMW's, internet in the Serengetti, mountains, snow, ice, ancient rock art, that all intermingle with the vast plains where the animals do roam in the, also, sweltering heat.   There you are, a whole prejudicial image cluster comes alive via a talk about the weather. I find this this ethnographic way of analyzing and deconstructing a concept quite fascinating---So, how's the weather by you?
Posted by Lynn (Pai) Deutsch at 9:38 PM No comments:

Thanksgiving with an African Twist

Well, it's that time of year again when haggling thoughts of what the Pilgrims really ate take over, but I can be pretty sure they didn't eat stewed crocodile, or Zebra meat like the African lion feast on no matter what day it is. While you at home may have already started watching your favorite holiday shows, or baking a wide assortment of goodies in your warm and cozy homes, with smells of cinamon and vanilla filling the air, some of us are sitting here thinking about running around the village and chasing a turkey to kill for Thanksgiving dinner. That's right, Peace Corps Service requires just a little ingenuity---it's not exactly over the river and through the woods to grandma's house this year---it's more like, let's even find a turkey in this god foresaken country and maybe keep it as a pet.

So, I sit here, in my not so cozy habitat, thinking of Thanksgivings' bounty of offerings, families gobbling down a scrumptious feast, and how in the USA, the average person consumes over 4500 calories on Thanksgiving day---they eat over 530 million pounds of turkey, 45 million turkeys are actually cooked, and did you know that domestic turkeys can't fly, but wild ones can fly over 55 mph but just for a short distance. Dang, all of a sudden, the sting of being on another hemisphere is making me feel really, really bad for these turkeys---though truth be told, if I were sitting at your Thanksgiving table, I doubt anyone would get more than a mouthful because I would've devoured it while the carving took place!

Lucky for you, I'm not at your dining room table, instead, it's early evening, and outside on the dirt paths, there's no holiday parade, no brightly ornamental floats, or melodious marching bands. Rather, my view is of my neighbor and Keoki running around trying to corner a chicken for dinner---I guess there's a little turkey in all of us!  Laughing at the site of Keoki and the plump woman running all over the place made me ponder of our traditions, and how many people have really ever even thought of taking the time to be deeply thankful on Thanksgiving Day, or is just the pumpkin pie they're thinking about. Quite frankly, being in the Peace Corps has made me thankful every minute of every day for the things I used to have, and the little I have now. I'm thankful for a flushing toilet when it works, for water and electricity when it's on, for having dental floss, for listening to the reverberating sounds of village kids sing my African name as I walk about, and for the kombie driver's avoiding the cow coming through the windshield and killing us all.

The holiday season was initially started in order to celebrate the harvest, and here in Africa that couldn't ring more true. No, Thanksgiving is not even a glint in the eyes here, but Pula, Rain, now your talking---it's everything to these folks, it's what they're most grateful for. Living in a small rural village certainly churns your eyes and heart to an entirely different meaning of being thankful and finding gratitude, because people here learn to improvise and make due with what they have.  And so, with the crescent moon hanging overhead,  I reflect on how small things can become huge gifts in the life of another.  No matter what you're grateful for, be sure to show gratitude for ALL you have, because there are those who have only the rain to look forward to!
Posted by Lynn (Pai) Deutsch at 10:18 PM No comments:


Other than good wildlife, Botswana can boast about their only delicious thing in this entire country, if not sinfully artery clogging, and that is the Fat Cake. Yup, even when Michelle Obama was here promoting good health, she indulged in more than one “unhealthy” Fat Cake. How can anyone really resist. Basically, the fat cake is made of dough and probably disgusting hydronated oils, rolled into a fat ball, then fried in more disgusting oil. Sounds like an American donut X 5 without the hole, meaning that with every bite you lose 2 days off your life, and gain 2 pounds--a pretty good trade off, I'd say!  I've indulged in a few along the way out of pure desperation, and I must admit they are quite good. My neighbor makes them, and Keoki goes crazy, just like most do for the infamous fat cake. They are just downright popular.

So, if I can digress for a moment, Phyllis, the NYC correspondence class teacher, had the good idea to share story books with the kids this semester. We would both read the same book, then have the little ones draw a picture from our lesson plan, and hopefully tell a little about the drawing. Great idea right! Most of my little ones never saw such a thing, let alone ever had anyone sit and have story time with them, so needless to say, 40 kids are piled on top of me and the book.  Instead of constantly screaming for them to get off me, I scaled down and chose 15 kids to go outside and do the circle thing. That didn't work either, but at least I only had 15 kids on top of me instead of 40. The pictures in the book are sending these kids into never, never land nirvana. Needless to say, The Ladybug Girl and the Bug Squad was a huge hit. All the kids were able to talk about the book afterwards, albeit in simplistic terms, but it's a start. So at the end of the book, the Bug Squad are all sitting around a table eating delicious chocolate cupcakes—yummy. Upon seeing the picture, I told the kids they were having a party eating----and before I finished my sentence, 15 kids jumped and yelled out, “they're eating FAT CAKES!  Explaining what a cup cake was compared to a fat cake was just downright futile. I could have been talking about the man from mars, they just know what they know, and that's that! Ya gotta love it! 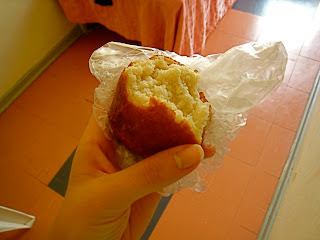 Let me digress one more time---in my school, our Form 3's were to be done with school after 2 long weeks of exams, then they have to wait until February to find out if they pass and could go on to high school.  Well, I brought my camera to take photos and maybe say some nice words to the group after the test.  But no, this is how Jr. School ends for these kids---the last the test is over, the Police Squad gather around and chase all 300+ away--with clubs and all.  No time for niceties, good luck, we love you...nothing.  I'm wondering though if they all ran away to get  a Fat Cake!

Uh, can I digress again please---Yay for Obama's victory yesterday!  African's are rejoicing, and showing emotion like I haven't seen here; in the schools, taxis, kombies, on the dirt paths, all over the place with huge enthusiasm. It's refreshing and hopeful that the Obama's may come again just to eat the Fat Cake!
Posted by Lynn (Pai) Deutsch at 9:14 PM No comments: