On a quiet, chilly, Saturday afternoon, Lefika came sauntering in while I was just lying on the couch reading. He stood over me, gazing down, almost penetrating my soul, when, this now grown up boy, said to me, “We'll pick you up at 7am tomorrow, and bring you home at 7pm.” “Where you kidnapping me to for 12 hours on a Sunday?” “Church!” “Sorry Lefika---no church, especially not for 12 hours, and no way am I getting out of bed at that freezing hour in the morning.” Well, I must have said the wrong thing, because his face contorted, his eyes got big and weird, and an overall serious and strange look came upon him. “You better come Tshepo because that lightning bolt that came in your house last summer was the Devil after you---my whole family thinks so too.” Whaaaaaat----were they gonna get me exorcised?

I quickly flashed back to that summers day when I saw the lightning through my house that struck the bowl I was holding, and how startled I was. Now I was just told by an 8 year old, that it was the Devil cussin' and spittin' and shaken and jumpin' at me. Geez, did the devil literally come out of the woodwork and attack me---I'm now wondering where he got my file? I know all to well where the devil goes, and I didn't like it none-to-well. Why on earth would the devil want a mere PCV mortals soul to take to the underworld, or was he just provoking and tempting me? Honestly Mr. Devil, I've been good, really!

Thinking about it---Isn't the devil just some archaic mythical character with horns, a tail, and a pitchfork--a creature with super human powers that lives in a place called hell. Or is the bible correct in teaching that there is a prince of darkness who works in the shadows, looking for someone to devour. Maybe the devil is actually very sophisticated and specialize, subtle and clever like the greatest undercover agent of all time. If so, and if this is true, I had been in deep shit trouble, but spared, obviously, by some higher force. All of a sudden, Africa is becoming a bit spooky!

But how on earth am I gonna get out of this one? What do you tell a kid who whole heartedly believes this, and now making me wonder what I did wrong to deserve that near miss. People believe such things around here, I understand that, so I told Lefika, as gently as I could, that what happened was an act of nature, and that I'm fine and will rise above any and all negative energies that may or may not be out to get me. I can't say he believed me, as his weird look took hold again, and he just slowly sauntered away the same way he sauntered in, just a bit more confused I think.

Immediately on Monday morning, I spoke to a sane, level headed teacher friend, who confirmed that the devil indeed does not like that I'm doing good deeds in Mmathethe, and that he doesn't like good people. I didn't like what I was hearing, so I went to yet another teacher who was not so sane, and heard the same thing. Ok then, I'm really not good, honest Mr. Devil, I'm not –just ask anyone I know! All I can say is that I have less than two months to go, the rains and lightening won't appear until after I leave, and by God, I'm not gonna run home and get exorcised, but I sure am gonna try to find someone in the States to check the reality of this Devil thing!

Ode to a Dog 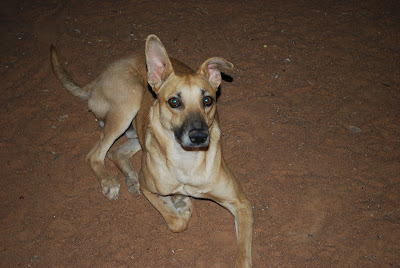 Some love cats, others love dogs, some think tarantulas make for great pets, and others would rather see them extinct. I love all—well, not the tarantula, but I have cats at home, and I grew up with dogs. Within weeks of being at site, a dog walked into my life, or I into his. He was skin and bones, snarling at the site of a person, had tics sprouting out all over him, one ear that flopped over, and was, like most dogs in this village---mean and unhappy. My neighbor really didn't want him, so I said what the hay—he'll tie me down a bit but I'll take him, clean him up, feed him, let him sleep outside and he'll hopefully protect me, but in no which way am I gonna fall in love, or even be friends with this dog. I'm not even gonna name him or teach him how to fetch a ball, ---yeah right! It took all of two days before he was named Keoki, one week before he was sleeping in the house, two weeks before I was completely in love, a month before he got what fun was like, and a few months before he understood english, at which time, our species differences vanished as we shared many moments of connected creaturehood.

Now, an African village dog is unlike an American dog, and owning my furry friend taught me great lessons in cultural integration. He taught me to be true to my own nature, authentic if you will---that there's no point in faking it because he and the villagers will sniff it out like a lion sniffs out an impala for dinner. He taught me that people are really strange, that it's kind of puzzling how we complicate life rather than simplifying it. He taught me always to keep 20% Wolf in me, because a person without a little wildness in 'em just ain't no fun. And he taught me to play more, that the game is irrelevant, just play!!!  Overall, Keoki has been a great influence on my well being and happiness here, and after he was done with my lessons, he taught an entire village what true happiness looks like.

I didn't necessarily pamper Keoki, like American pampering per se, or like my friends John and Carol hysterically did by putting clothes on their little ones in the winter---totally competing with Botswana cultural logic. Nuh-uh, not Keoki, unless I had a NY Yankee T to put 'em in! I can't even imagine what was said by the Batswana in their village---I wish Carol could have been a fly on their walls to hear what the strange Americans did so we could all laugh until we cry!

Well anyway, as one sees, there is a great correlation between someone's dog and their personality. Keoki definitely is not the adorable, white little pup running around with a cashmere sweater on. He is a tail wagging, rambunctious, down to earth, athletic, no frills kind of guy who has earned his rightful place on this earth, and I'm glad to see I passed on some of these qualities. But in another month or so, he'll have to go back home, just like I will. I'll revisit the adventure in my mind, our battles when he tore up my organic veggie garden, our lively evening walks, etc.. all with bemused pride---but it is the loyalty, his head on my lap, his zest for life, and taking in the hot afternoon African sun that will stay with me forever.

The Beginning of the End


Bots 11 went to their Close of Service Training, which, officially and sadly, marked the beginning of the end, and end of an era for us! A few days before, I called a friend telling her I was freaking out about the whole thing, after all, isn't being in the PC sort of like being in some kind of arranged marriage. A marriage to a country, a village, fellow PCV's, and all is intensified, nothing is normal, and now after 2 years we're breaking up. But hey—it's been a great relationship!

The point is that Bots 11, minus 6 of us, made it all the way to the finish line. We made it through the drudge of PST, we made it through our initial struggles in our home stays and villages, we made it through many a Life Skills horrors, good and bad counterparts and schools, harsh weather, water and no water, electricity and no electricity, crummy food, we made it through long and hot kombie rides, and we made it through because of the inner fortitude of this group and the friendships formed.  Bots 11 has had an insatiable appetite for working hard, playing hard, and traveling hard.  I'm really gonna miss the first words when you run into your mates at a function: "I ran to the shower!" This week of togetherness, saying goodbye as a whole, regaling stories, watching films, and just enjoying each other was what this week was all about.

In hindsight, it feels good knowing the endless lists of what we've been through. I know I am not the person I was when I got on that plane at JFK, this experience has changed my life in a deep and profound way---in the way I see humanity, how I appreciate the simple things, and for simply being alive. I know the feeling when my landlord pops over, puts his arm around me and says “we've come along way.” Yep, I felt right like I was in a Dances with Wolves movie. But indeed, we have come along way. Even though I went through a few slumps, it was not a bad roller coaster ride. I've come along with my village, my school, and with myself.  I've loved the travel and I've loved Africa, especially the stars and wild life. I fell in love with a dog who has been my protector and great friend, and that is almost the saddest part of starting the good bye season. Keoki won't have steady meals, shelter, or love, but he has developed quite the personality and hopefully that won't be killed off.

Coming to the end of one's PC service is one of the strangest moments in life, and incredibly difficult to describe if you're not in it, but I'm just gonna enjoy my last 2 months in my village and pray that this adventure doesn't just fall into a distant memory. 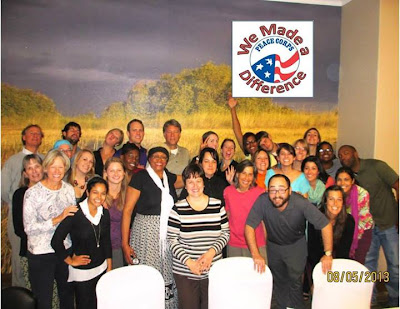