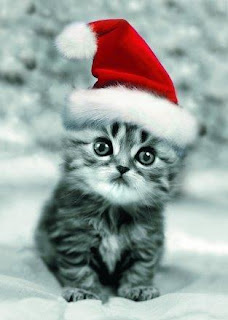 Oh no, not another flashback dream: it's around 1969 and there's some war going on in Southeast Asia, I'm supposed to go home from college for the holidays, but instead I'm hanging around somebody's East Village hovel on XMAS eve---much more exciting than the Jersey suburbs---we're smoking some weed, some tv show is emanating from a cheap black and white tv, we're getting the munchies, and now leading a magical mystery tour over to Chinatown to dig the kosher Chinese restaurant Schmolka Bernsteins, where I think, a waiter has been transformed into something like Santa's elf. It's now 12 midnight, 2013, and I wake to being in a strange house, with an alien dog looking at me, I wipe my eyes and realize, holy crap, I'm in the Peace Corps and it's not 1969 in Greenwich village. Hmmm, I wonder who won that war!

When I woke, I started wondering about the ingredients for Jewish XMAS season in the Peace Corps:
Solidarity, self-aware alienation, a mildly altered state of consciousness to get through this time of year, soul food, Chinese Food and a movie. Well, no Chinese, soul food, or movies in this village, and an altered state is through meditation and yoga (not that I would want an altered state any other way these days).  I used to think that the Jews loved the holiday season more than Christians---no pressure for gifts, just eat your Chinese, go bowling or something, and enjoy the music!  It was magical!  In Africa though, the pressure is equal to being Jewish---no gifts, just dance the day away, and move on!  Sounds good to me!

Not that this has anything to do with being Jewish, but I then started wondering what I missed out on this past year: Naked people going nuts in Britain—hmmm--maybe PCV's should get a male circumcision program going there, whatta think Prince Harry;   Did I miss the final season of 30 Rock---this is really upsetting me!  I missed Aly Raisman winning the Olympic Gold medal in floor to “Hava Nagila.”; and I think I missed out on Mormon Hip Hop Mitt Romney mangling Bush-style malapropisms.

Gee, maybe I should go back to dreaming or better yet, figuring out how to breach the lines of normalcy through New Year's Resolutions. Let's see, as the silly season of excess ends in the states, and we all stare at the extra notches on our belts and recoil in horror at flashbacks of too many donuts eaten, or ooops—I forgot to exercise this year, etc...the time has come for us to try to redeem ourselves for the last 365 days, and make that resolution that will really stick and be different, or at least not capitalize on the same mistakes year after year. I love the idea of New Years resolutions, but not as much as the thought of that Chinese Food in NYC. Here are my resolutions for 2013......

1) Not to take my hopes and dreams seriously, and in my spare time, when I'm not ruling the world, I'd like to get more familiar with getting things right!

I've got a sneaky suspicion, this year is gonna be a good one if I make it out of here in one piece! 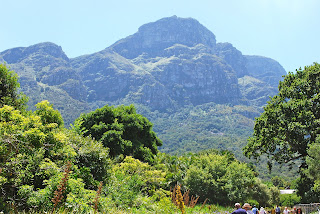 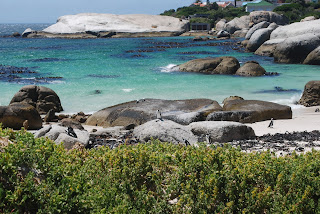 There's a place for every kind of traveler, from a Taoist spa in Thailand, or sitting under the star filled sky in the African bush, to the sophisticated Cape Town. Amazingly different, completely unique and not at all what I expected. I came to South Africa with few pre-conceived perceptions, only an idea of what I thought CT might be like, but in fact, it has beaten every thought or idea I had. It absolutely has blown me away and I have fallen in love!

Maybe it's the similarity in climate and feel to my adult roots in California, or maybe that Seouth Afreca has a character that is too interesting and compelling to ignore. After all, this is the land of Nelson Mandela, who brought down apartheid, and then had the audacity to say “no retribution look to the future.” It's easy to see why CT, or the Mother City, is so loved. And love it I did! From the moment I stepped out of the plane and lost my passport, nothing was gonna stop me from relishing this fabulous place. From the sea to the backdrop of Table Mountain and Devil's Peak, to the funky style of Long Street, to the classy valley wine estates, and the spirited markets and water front, not to mention the very hip coffee shops, the craggy coast line, along with the warmest and most welcoming people I have ever met. Never in my travels has a city grabbed me like this one did—-it is simply nature's masterpiece! 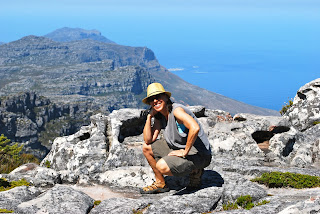 We went up the newly adorned 7th world wonder of nature of Table Top Mountain, admiring it from the top and all around the city, then to the World Heritage Kirstenbosh Gardens, a wine tour where I fell in love with not a wine, but a dog, Simonstown to admire the Jackass Penguins, and my favorite---the Old Biscuit Mill---an indoor/outdoor market of food producers, farmers, arts and crafts, people eating nibbles and sitting on bales of hay, big lounge cushions, anything so long as they're outdoors and having fun.

With few inhibitions and a desire for exploration on a full stomach, I walked about this city like I owned it. Granted, the wonderful wines of South Africa cures everything, and the power of good food always makes life better, especially when you are in the Peace Corps and in a country where the food literally sucks. 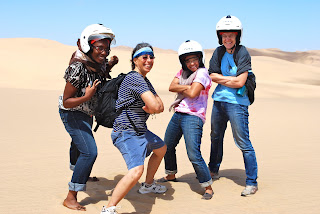 We also were in Namibia, a sure contrast to Cape Town, but equally great seeing the desert where the land stretches out in all directions, shimmering to an uncertain horizon. Everything seems to just makes sense to me when I am in the middle of nowhere. My cares and worries disappear, my body and mind get exercise, and there's nothing to disturb the ebb and flow of life. I felt like Iwas 18 again zooming around on our quad bikes through the dunes, singing XMAS carols through the streets with my fellow PCV's, seeing the sea again, and nourishing our souls with good food.

Life is so good, if we only take the time to see it and understand it!

The lion cub, looking cuddly and comfy in the crook of it's mother's neck, will one day grow and become a sign of courage and fierce dignity. The same can and should happen to children with the right love and comfort.

Lately, and because of an incident that occurred, the notion that the truly wise person finds room in their life for the spirit of the child, just as the lion does with it's cub, and so, the wise person, no matter what age, can play, trust, grow, and most of all, recover from mistakes. The wise person listen's to it's children, and recognizes that the child bears within a certain divine quality that often disappears in adults.

And so, leave it to a child to get to the heart of the matter instead of the wiser adult.  My very dear friend, Lefika, who is the ripe old wise age of 7, did something naughty. When I was in Lesotho in October, Lefika came into the house when Stanley was feeding Keoki, and 1) wouldn't obey Stanley to stay out of the house, and 2) he attempted to take some small toy items that he thought he rightly deserved. Well, when I got home and was told about this disappointing act from a good friend, I immediately confronted it, and, hurt as I was, I told Lefika that we could no longer be friends unless he found a creative way of telling me he's sorry. At that, and after my schpeel of stealing, I walked away with the hope that he'll find a way to apologize, and being the wise person that I am, I can forgive him and move on.

Almost two months go by, and though Lefika is in my primary class, and shines above all, nothing has happened. Sitting on the porch the other day, I was wondering who was gonna give in first.  With the holidays upon us, and my service in it's final year, I didn't want to let this go much longer---but, as wise as I am, I am also as stubborn, and apparently, so is my lion friend Lefika. All I wanted was something a little creative from this highly intelligent boy whom I've grown to love---so, given that the African Gods probably heard my thinkings today, I walked by Lefika's house with Keoki and saw him climbing like a monkey up a tree. He sees me, jumps down with the same agility as a monkey, looks at me, and bows in an Asian form to me---and says, can we walk together again. 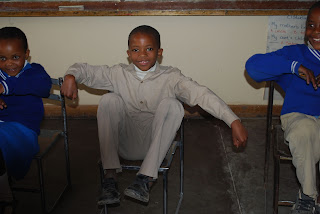 There was nothing in the entire world that could have been a better peace offering than this child having the where-with-all to know that something profoundly Asian would absolutely get me to say ok, let bygones be bygones. Lefika and I walked for over an hour talking about life, and other unusual happenings. He is certainly a lion among all others here, and as I found out today, has the heart of one too!