Yesterday a child came out to wonder.... caught a dragonfly beneath the sky.
Didn't ya just love playing kickball on the street during hot summer nights, running to the Good Humor truck for ice cream, and then getting jars and catching those fire flies---ah, those were the days!

Fearful when the sky was full of thunder.........
My brother could've cared less if I was scared of thunder storms on a Saturday night while he was supposedly minding the house when the folks were out...so clever me, took my pillow, ran across the street for safety, and when mom and dad came home and asked where I was---he had no idea.  The thunder ceased, but the police cars didn't.  I'm right here mom, calling out the window of my neighbors home.  Boy, did I get in trouble!  Now, in Africa, the thunder is even more scary, but there's no where to hide except under the couch!

And tearful at the falling of a star.   It's a miracle when one sees a falling star, and here in Africa I have seen many, and just like a kid, I still get a little tingle, and a little tearful---and still, I always make a wish.

And the seasons they go round and round---and here I am, having my 2nd birthday away from the US, and was thinking about what it really meant to be 50 something. At first you kind of have to get used to saying ffff ffffiffty—am I stuttering? Like many boomers my age, I don't look, act, or feel like I'm the stutter word. I feel like I'm on the fiesty side of 50 something.  And when your ffffiiftttty something--it's nice to belong to a book club to keep yourself in check---Ours is the No Shame, No Blame Book Club in Pacific Grove.

Joni Mitchell's song is such a wonderful metaphor for how we go around the seasons, skating over 10 field frozen streams, cart wheels turning into car wheels through the town, hearing words like when your older must appease'em, and promises of someday make that dream.   How true---and boy did I love to skate at our local pond in New Jersey!

It won't be long now till you drag your feet to slow the circles down----but it's nice to know that you can reconnect with those you thought were long removed through a phenomena called FB.

Though her dreams have lost some grandeur coming true, there'll be new dreams, maybe better dreams and plenty, before the last revolving year is through.  Yep, I chucked it all in my ffffifffty's, and made better dreams via my stint in the Peace Corps, with hot flashes and all!

And the seasons, they go round and round, and the painted ponies go up and down. We're captive on a carousel of time---we can't return, we can only look behind from where we came, and go round and round in the circle game. 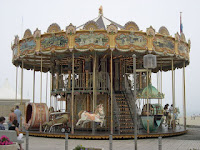 Master of My Domain

PCV's typically have to find something to amuse themselves in the endless hours of being in an isolating village, some of us very far away from civilization. So what do we do—we read a lot, we have lots of percolating thoughts bubbling and bouncing around about why on earth we are here, and we share media so we can cope with the long winter nights. 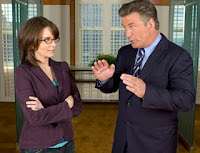 Somehow when I was home in the States, I never watched 30 Rock, so when a friend put all the episodes on my computer, nightly I watched one after the other, laughing a lot, and grew to love Tina Fey, who has struck comedic gold in creating her geeky, but lovable loser self with self-image issues, and the metamorphosis and brilliance of Alec Baldwin. The show is similar to Seinfeld in that it really is about nothing, and it isn't afraid to take wild chances, but there may be too many lead characters, and I don't like all of them like I do in Seinfeld. Nonetheless, it is the funniest and most brilliant show since the glory years of Seinfeld. Is that sacrilege? Oh my god, did I become a Seinfeld traitor---it just can't be. So after several months, I weaned away from 30 Rock, and started day one of Seinfeld to see how I would feel.

Watching Seinfeld again came at an excellent time---during the only slump of my service, my cat at home passing away, watching kids fail every class, losing my passport, and getting struck by lightning—but lived to tell about it. Even though I still find Jerry's voice a little gyrating, there's something just pleasanly spurious about the sitcom. It's not called the show about nothing for nothing---nothing serious ever goes on indeed, but perhaps it's Kramer's rubber like antics and scams to get rich by the episode, or George's constantly trying to hook up with a woman with the sole purpose of getting laid, or Jerry's nuances of Superman that I just find ever so endearing.


As I sit night after night, laughing so hard that the villagers must think I'm having a party, I thought that being a PCV is kind of like having a Seinfeld life---it has a lot of somethings, but eventually, they all result in a lot of nothings---yet over time, character builds and hilarity ensues!   So, yes, Seinfeld definitely wins out over 30 Rock for several reasons, but, the main reason is that we, as PCV's, are Masters of our own Domain!
Posted by Lynn (Pai) Deutsch at 11:01 PM No comments:

The Peace Corps offers our fundamental patriotic dream redux; the drama of self imposed exile, the promise of a blank slate, a life structured around virtue and independence, an unchartered opportunity to self-aggrandize, and on a deeper level, a chance not to be an asshole anymore. So when I first stepped foot in this village with my slate blank, nightly creatures, both human and animal, were peering into my windows, rattling my doors, scrummaging through my garbage, scaring the daylights out of me, and I knew life here was gonna be just a wee bit challenging. Somehow, I had to win over both the people and the animals that were ever so curious. I also had a sneaking suspicion that if I paid too much attention to kids, that they would be swarming my house, and the peace that I sought would be just a dream.

Now one would not exactly describe me as walking quietly through life, and because of that I had kids, young and old, swarming my house, my every move, and even when my doors were locked, screams of “Tshepo” would echo through the village. Thinking it was cute at first, it got waring real fast, and I had to put an end to it all, or at least try! So on my walks around town, I would just say hello, mingle with those who had some sense of boundary, push through or ignore the real rascals, and allow just a select few on certain days to enter the white kingdom. It was never totally peaceful though, because they still hovered outside the gate looking, or would climb over the fence, and sit on my porch at 7am on a Sunday morning. It was all to easy to lose patience at times because they just don't take no for answer, and the egg that they see you eating for breakfast becomes headline news around town.

Some days in the Peace Corps are just to crazy for an outsider to understand, but trust me, it's crazy when all you want is for someone to tell you exactly how to get somewhere, and all they know how to say is “over there,” or going to the Post Office to mail a package home gets so confusing that the packages are never sent, or there's no water for days and your hot, sweaty, smelly, and dreaming of anything ice cold to drink but there's no electricity to even cool the water bottle you bought, or it's pouring rain and lightning outside and inside your house, and one spends all winter wearing a sleeping bag around the house like a full body condom,---yeah, it can surely make ya think if being that asshole at home is better than this!

But time has it's way of healing, it has a way of making things right, it has a way of changing things when you don't even know it.  After having one of these nutty days that only Seinfeld can appreciate, I walked around my village, played ball with a bunch of kids who now know when I say stop, things stop; I talked to some others who never ask me for money or food anymore; I got a big hug from a neighbor whom I brought her son home from Gabs today because they had no money to get him back from his aunts house in Gabs; I received a bucket of water and a bowl of peaches right off the tree from other neighbors that don't seem to give a damn about anybody; I got crawled on like a horse from another group of kids who have been at the cattlepost for the holidays and just returned very excited to see me; people on donkey carts are yelling to say hi because they too have returned; this one guy, he must be about 18 or so, who's always singing loudly and freely throughout the village, and who has always referred to me as “cousin,” serenaded me on my porch, and as he was leaving, yelps out---”see ya tomorrow cousin;” and then Keoki was herding the cows out of the yard, and one cow went flying over the fence---I never knew cows can jump like that, but the thing was---I was sorry the cow left, they are part of my life now!

When all finally quieted down, I sat on my porch with a glass of South African wine, Keoki at my feet, listening to the reverberating sounds of the village kids, hearing my cousin singing in the distance, watching Stanley dancing in the yard because he's so happy to finally be home, and while looking up at an African sky filled with such bright stars, I thought to myself---as much as I hate the struggles and Botswana sometimes, things have changed---no animal or human peer in to scare me at night anymore, the kids who I thought were little rascals are little darlings now, people here totally embrace my existence, the kombie driver puts me up front so I don't kill someone sitting on top of me in the sweltering heat.  I've grown to love my dirt paths that lead to somewhere, I've grown to love watching the kids this time of year hanging from trees, watching people shuffling their feet in the dirt with their wheel barrels to collect water, and I've grown to love the feeling of just being!

So, am I less of an asshole?  Who knows, but PC service surely puts you in your place, and for the times where I've felt isolate, angered, or starved for something healthy, there are dozens more times when I feel peace running through me like the rays of the African sun.  And as most PCV's will attest, although you join the PC to serve others, your the one who comes away from the experience as though you received the greatest service!