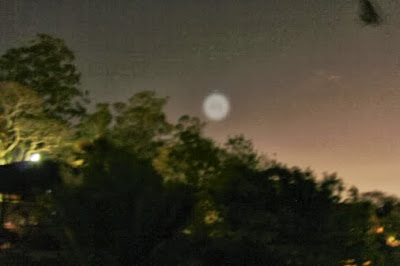 Last night at around 7pm, my friend Stanley and I were chatting on my porch, when he quickly grabbed my arm, and his voice went a notch up stating "Tshep---look at the sky, something very strange is happening."  Indeed it was fascinatingly strange, as this big white light went roaming around the African sky for about a 10 minute period.  To me it reminded me of the witch of the North's ball as it was leaving Dorothy to wonder what she should do.  I don't know, should I have started clicking my heals saying "there's no place like home."

It was a cloudless night and some say it was star wrapped up in a solo cloud, but whoa, the cloud was moving the speed of the "watcha ma call it," and how did both things disappear at the same time?  EISH! Regardless of the source, I initially thought it was an incredible sight.

So today, my village had a big Independence Day Celebration, and everyone was buzzing about it, asking the Elders what the sign in the sky meant, and all were shaking their heads.  That's kind of scary when an elder can't figure it out.  So I did a little research, and indeed, the phenomenon was seen all over Southern and Eastern Africa.  Some say it was a Pillar of Fire, or a Cloud which takes the children of Israel from Egypt---some say it was due to a rocket that had launched somewhere, and they were sending off the last satellite, but most suggest that it was Gods messenger.  Now my curiosity is highly piqued, and apparently the bible says that in the last days, good old God will show signs and wonders on earth in the sky.  Holy Crap!  The world was supposed to end the September that Bots 11 arrived---we are leaving in two weeks, fulfilled from our service, and after all our good deeds, we may be doomed.
Posted by Lynn (Pai) Deutsch at 4:09 AM